In 2013, the Swiss Arts Council Pro Helvetia launched a specific promotion tool to support the book publication process for the Swiss photographers working with national or international publishing houses. The preference is given to the quality of the concept, the relevance of the theme, as well as the cutting-edge photography. About 30 books have been issued by now, such as international bestsellers–“The Jungle Book: contemporary stories of the Amazon and Its Fringe” by Yann Gross, (Aperture, New York, 2016), “Kodak City” by Catherine Leutenegger (Kehrer Verlag, Heidelberg, 2014), “Continental Drift” by famous duo–Taiyo Onorato and Nico Krebs (Edition Patrick Frey, Zurich, 2017), as well as publications distributed through the channels of self-publishing and small publishing houses, which are modester, but no less essential and representative of current production.

For the Moscow exhibition “Swiss Photobook Today” Caroline Nicod, Visual Arts specialist in charge for the promotion of photography at Pro Helvetia, together with Ekaterina Zueva, curator of the festival Photobookfest, selected the twenty most relevant publications to be exhibited at Photobookfest. The selection reflects the diversity of content and form. Some authors see photography as a historical document or create conceptual designs based on found-footages, others are passionate about photographic abstraction, paying great attention to printing techniques and materials, and others again grasp the intimacy of a person, a community or a city through storytelling processes.

The table design, conceived by Brian Paul Lamotte together with Malgorzata Stankiewicz, graphic designer and publisher, gives a specific frame for each book, which can be taken and read, then put back at its place easily.

From the 11th to the 13th of May, as part of the exhibition, a public educational program will be held, featuring curator, historian of photography, director of the Museum of fine arts in Le Locle Nathalie Herschdorfer, photographer and author of the project “There are no Homosexuals in Iran” Laurence Rasti, and editor at the Swiss publishing house Edition Patrick Frey Andreas Koller.

Nathalie Herschdorfer is an art historian specialized in history of photography. Curator at FEP, she is also Director of the Museum of Fine Arts, Le Locle, Switzerland. In 2010 she was named director of the photography festival Alt. +1000 in Switzerland for which she curated two years of programming. Previously, she was a curator at the Musée de l’Elysée in Lausanne, where she worked for twelve years on major exhibitions, including Face: the Death of the Portrait, and retrospectives of Edward Steichen, Leonard Freed, Ray K. Metzker and Valérie Belin. She is the author of Afterwards: Contemporary Photography Confronting the Past (2011), editor of Le Corbusier and the Power of Photography (2012) and co-author, with William A. Ewing, of reGeneration: Tomorrow’s Photographers Today, two books dedicated to emerging photography on the international scene. Among her recent projects are a dictionary of photography including over 1,200 concise yet fully detailed entries on all aspects of the subject (Thames & Hudson/Editions de La Martinière, 2015), the book NewSwissArchitecture (2015), and Coming into Fashion: A Century of Photography at Condé Nast, a travelling exhibition produced by FEP and accompanied by a book published in 6 editions. 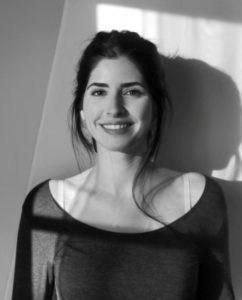 Laurence Rasti’s photographs question the notion of identity and codes of beauty. Born to Iranian parents, she grew up in Switzerland where she studied photography and received her Bachelor’s Degree at the ECAL (Ecole cantonale d’art de Lausanne) in 2014.

The cultural hybridisation of her Iranian roots mixed with her Swiss upbringing has caused her to question the habits and codes defined by these two cultures in an attempt to understand the power of gender in our societies. Laurence Rasti’s work has been exhibited in various collective exhibitions.